Disclaimer: The following information is summarised from the Weybridge Society’s Planning Panel’s records. We endeavour to make it a true representation of the panel’s opinion and our actions and plans, and it is up to date at the time of writing. But for the latest and most accurate developments on planning, please consult Elmbridge Borough Council.

2016/3151 – Advertisements at Roundabouts – at Brooklands Road, 2016/3155 (Station roundabout), 2016/3158 (Morrisons Roundabout) & 2016/3160 (War Memorial roundabout at the Cricket Green). These four applications relate to advertisements on roundabouts. In our previous newsletter we reported that all were refused planning permission at the July 13 Planning Committee meeting. Unfortunately all of these applications – other than the War Memorial roundabout at the Cricket Green – have been taken to appeal. The general public, which includes the Society, have been denied the opportunity to comment. The Society is currently challenging that decision by Elmbridge Borough Council.

2016/4076 – 11 Oakfield Glade, additional 2 storey house. The proposed house was “unattractive” and an overdevelopment totally out of character with the neighbourhood. This consideration was accepted by the South Area Planning Committee. The application has unfortunately been taken to appeal.

2017/1209 – 11a Portmore Park Road. This application for an additional two-storey house was refused on July 3. An appeal was lodged in late November and will be conducted using the written representations procedure. The public was denied the opportunity to comment, but the challenge to this has been successful. A decision is expected by March. 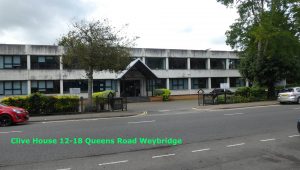 This planning application was reported in our previous newsletter. It covers knocking down the existing building and replacing it with a three/part four-story building with basement to provide 30 retirement flats. The proposed design was out of proportion in terms of mass, bulk and height and its failure to recognise the local environment of a well set back building line. The Main Planning Committee refused the Application but an appeal has been submitted. Determination of the appeal is due in early 2018.

2017/0953 – Arbrook Farm, Walton Lane Gates to the road, and 2017/0196 – area used during construction of the new bridge. These applications were also reported in our previous newsletter, regarding the retention of a sliding entrance gate, brickwork flanking walls and rising bollards, as well as the area (originally agricultural land) used by Costains during the construction of the new Walton Bridge. The Society objected to all of these as the original application placed on Costains was that the land should be returned to its original state once construction work had been completed. The Society objected to the use of Green Belt and noted that the land use is meant to be equestrian not agricultural. Furthermore there are highway safety and flood risks. The applications were refused by Elmbridge Council but have now been taken to appeal.

2017/288 – 20-22 Castleview Rd. The proposal is for a terrace of five two-storey houses. The Planning Panel lodged an objection on the grounds of a cramped and undesirable development. Fourteen objections have been received by the Council. The application was refused on Aug. 11.

2017/1176 – Salisbury House, 20 Queens Road, Weybridge. This application covers building a rear extension to an existing building which reduces on-site car parking from seven to three spaces. Local residents were concerned this would create significant parking stress in an already saturated area. This concern was ignored by the Officer who recommended a grant based on advice from SCC Highways, which accepted that there was sufficient on-street parking to accommodate the loss of on-site car parking spaces. That was based on on-street parking data provided by the applicant, coupled with two fleeting on-site visits by SCC officers. The local residents group (Triangle Residents Group) undertook a far more detailed and robust parking survey which clearly showed that the data accepted by SCC Highways was highly questionable. The application was refused by the South Area Planning Committee on Dec. 11 on the basis that the loss of onsite parking spaces would create unacceptable parking stress in the local area and would be detrimental to local residents’ amenity. 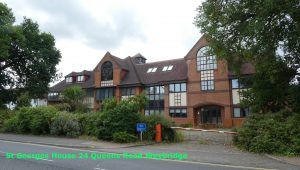 This application covers a four-storey building containing 43 single and double bedroom apartments with 34 car parking spaces. The existing building line and trees would be maintained but there would be a significant extension to the rear of the existing building. The Society objected to this application based on the mass, bulk, height and design, all of which are inconsistent with the Queens Road Village environment. The building would also have an impact on the setting of the Grade II Listed Weybridge United Reformed Church. Effects on nearby residents’ amenity – lack of car parking and public transport – were also raised as concerns. The application was granted on Dec. 11 by the South Area Planning Committee.

2017/2086 – 17 High Pine Close. This covers a detached two-storey house with rooms in the roof space and detached garage in the rear garden. The basis of this application is for a detached house in the rear of 17 High Pine Close with access for cars, pedestrians and service vehicles from York Road using an existing footpath. Sixty objections were lodged based upon numerous factors: poor access (it is not clear who owns the path from York Road which is used by local residents); effect on neighbours’ amenity in terms of separation of buildings and reduction in natural light; and the site being too small for the proposed building. The proposed development was also seen as contrary to the established character of the road and footpath (currently large houses spaced with substantial gaps). The Society supports the residents’ views. The application was refused in early September and an appeal was lodged in late November which will be conducted using the Written representations procedure. 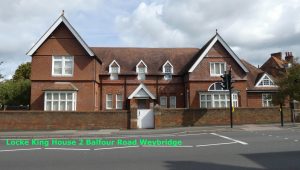 This covers the demolition of Locke King House and replacing it with a two-storey building comprising ten flats, basement parking and landscaping. At the time of writing 14 objections, including that from the Society, have been lodged against the proposed development. These objections highlight the proposed design as inconsistent with the local street scene, detrimental to the Conservation area, and not enhancing the character of the area. The tenor of the objections is in-line with the view of the EBC Planning Conservation consultant, who has noted there are no substantial public benefits that outweigh the harm to the Conservation area. The Society supports these views. The application is still under consideration.

2017/2309 – Working Men’s Club, 75 St Mary’s Road. The Society took no stand on the proposed alterations to building and façade, but the Council refused them on comprehensive grounds.

Land at corner of St George’s Avenue and Queens Road McCarthy & Stone held a public consultation on Dec. 19 at the Oatlands Park Hotel during which the developer presented plans for a 59 apartment retirement building with 43 car parking spaces. This would require the demolition of five existing buildings. The frontage of the site on St George’s Avenue would be 130 meters (for comparison, Austin Place in Oatlands Drive is around 120 m.) The building design is more sympathetic to its locality than other similar developments in the area, for example St George’s House (see 2017/2534 above). The developer plans a four storey mansard design. Efforts have been made to retain all the current trees, which maintains the current tree-lined environment of this part of St George’s Avenue. The formal application will be made in early 2018.

Morrisons Monument Hill (replacement tree). The Elmbridge compliance officer has confirmed that a replacement tree was available and would be planted when the conditions were suitable.