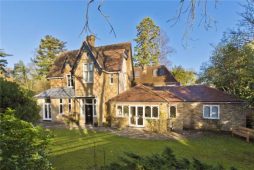 EBC Application 2021/3349 covers the development of a detached three-storey building with rooms in the roof space to provide 26 flats with associated parking, landscaping and bin and cycle stores following demolition of existing two houses. To be clear the application relates to both Heath House (picture above) and Heatherbank on Cobbetts Hill which were originally one property called Heatherbank. Full details of the Planning Application can be found on this link –  Elmbridge Borough Council

This application may be recommended for approval just because of the number of additional residences it would provide, however the greater the number of objections may result in a more balanced decision. The public can make comments through the above link or directly to tplan@elmbridge.gov.uk making sure that you reference the Planning Application (2021/3349) in the Subject line. Comments are requested by November 26th.

There are two separate issues associated with this application.  The first is whether the existing house should be demolished and the second whether the proposed development is appropriate for the location.  The Society will be objecting to the application on both of these issues; the following summarises the reasons.

DEMOLITION OF EXISTING BUILDING
The existing two houses to be demolished are a pair of semi-detached houses, which date back to the 1860’s when it was one house built for George Fergusson Wilson.
George Fergusson Wilson was an eminent Victorian and a person of considerable note.   During the first half of his life, he achieved eminence as an industrial chemist resulting in the creation of ‘Prices Candles’ a company of exceptional heritage that still exists today.  He went on to become an enormously important horticulturalist and set up the world famous Royal Horticultural Society (RHS) Wisley Gardens.  As part of this work, he experimented prolifically in his garden in Weybridge.  This garden still contains many features and species that were instigated by and planted by George Fergusson Wilson and are still of interest to RHS scientists. George Fergusson Wilson was a patron of the arts and was strongly associated with many of the finest exponents of the same.  He was a Fellow of the Royal Society, and of the Royal Society of Arts.  He was Vice President, Treasurer and Fellow of the Royal Horticultural Society and was a member on the committee of the National Memorial to the Prince Consort, the Albert Memorial, he presided on the management of Kew Gardens.  It is likely that the sophistication of the design of the Property and its gardens were a result of such associations.
The 1860’s building is a substantial Victorian Villa with distinguished architectural treatment including decorative diapered brickwork, and roof tiling.  It is of intricate design and has a complex roof including pierced bargeboards and has mullioned and transomed windows.  Its sophisticated design appears to display some features which foreshadow the Arts and Crafts period and may be a result of the distinguished artistic and architectural company that the owner kept.  Many buildings within Weybridge are of the Arts and Craft style.
Currently, the building is not listed but EBC has committed to locally list the building and the process is underway and is supported by Surrey County Council. However, a Property Developer has acquired an interest in Heath House and has applied for a Certificate of Immunity (COI) to facilitate such demolition and redevelopment; the Listing Review Officer at the Department for Digital, Culture, Media and Sport is minded to issue a COI. If a COI was issued it would mean that Heath House could not be nationally listed for at least 5 years.  The Weybridge Society has registered its formal objection to the potential COI.  The objection is made on the basis that the Property fulfils all the criteria for Listing under the Department for Digital, Culture, Media and Sport’s ‘Principles of Selection for Listed Buildings’ document, published November 2018 (the Principles).  Furthermore, the property should be safeguarded on the basis that it represents a valuable asset to the town’s architectural, landscape and historical fabric.  It is the opinion of the Weybridge Society that the Property is of special architectural and historic interest under the terms of the Planning (Listed Buildings and Conservation Areas) Act 1990 and should be listed.  This view is shared by Elmbridge Borough and Surrey County councils who are in the process of locally listing the Property. Our MP, Dr Ben Spencer, has also supported the national listing of the property as has the Royal Horticultural Society.

PROPOSED REPLACEMENT BUILDING
The proposed building is clearly a drastic over-development.  Its mass and scale are completely inappropriate to the area.  The design is generic, seeking to pay lip service to the vernacular but without any of its grace or scale.
It is unlikely that the protected trees could be retained without considerable lopping and disfigurement and there are concerns about the damage that could be caused to the roots of these trees. There is the potential for pressure for further tree surgery work to be ongoing with future residents complaining about lack of light etc.
There is also concern over the additional traffic created by the proposed development. The proposed 26 flats would increase significantly the number of dwellings serviced by the single lane access to Cobbetts Hill.  Additionally there must be questions about the suitability and safety of the junction of Cobbetts Hill with Brooklands Road to cater for any additional traffic to and from the proposed development.

If you have any comments you may wish to send to the Society, please use planning@weybridgesociety.org.uk .