Below is the text of a letter sent to allotment holders, and other parties, from the Weybridge Charity. This confirms their decision to seek development permission to build on a small area of the existing allotments, outlined in RED on the plan below. 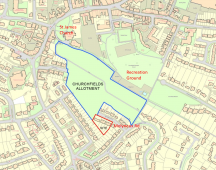 ” Since I wrote to you in June I have received a lot of correspondence from both allotment tenants and concerned residents about the Charity’s plans to develop the ‘Molyneux Road triangle’ for housing. Many of these letters expressed, totally understandable, concerns about what form this ‘development’ may take, a worry that I was unable to address until the trustees had decided themselves which one of several options they wanted to pursue.I am pleased to say that this decision has now been made and although there is a lot of work to be done before the outline planning application can be submitted, I wanted to let you know, as soon as possible, that the scheme will be to construct 2 pairs of semi-detached, 4-5 bedroom houses and a block of 6 one-bedroom flats. As previously advised, none of the properties will be for social housing.

The Charity intends to retain ownership of part of this development. Only the area of land required for the 4 houses will be sold to the developer. The contract with the developer will require him to construct 6 flats for the Charity to let on the open market. This will provide the Charity with a very significant and totally new source of finance.

The Charity needs this additional funding to help those suffering hardship in Weybridge. Although there have been suggestions that the Charity could raise funds in other ways, the trustees have concluded that the only realistic way of securing the scale of funds required, on a regular basis every year, is by the development of this relatively small portion of the Churchfields allotments (see attached plan).

It has not been an easy decision for the trustees to make, but their role requires them to act in the best interests of the Charity, regardless of their personal views or prejudices. I should add that the trustees themselves are unpaid and will receive no personal benefit from this development.

In my previous letter I explained that the objective of the Charity is to benefit the poor of Weybridge. This has always been the overriding function of the Charity and is the motive behind this decision. Originally, the allotments used to help to meet this objective by being restricted to the poor, but this was amended in June 2000 to allow all residents to enjoy the facility without regard to their financial circumstances.

Although the Charity’s object is to benefit the poor, the trustees recognised, in their 2000 Scheme, the importance of keeping allotments as an important local facility for a healthy recreational pursuit. As I have previously confirmed and now repeat, it is the trustees’ firm intention to retain the rest of Churchfields as allotments for the foreseeable future. Development of the Molyneux Road triangle will not set a precedent for development on any other part of Churchfields. It will, however, provide the capital to help ensure its long-term future as allotments.

Replacing the toilet; bringing more of the area under cultivation and appointing landscaping contractors will be costly but necessary works to ensure full occupancy at Churchfields in the future. In deciding to earmark c£100k from part of the proceeds of the development for these improvements, the trustees underline their long-term commitment to retain this 8.9 acre area for allotments.

In my June letter I set out a compensation scheme for all the tenants who will be displaced from plots 78-85A, and there is no need to repeat that here. I would add, however, that the practical help of other allotment tenants would be welcomed when their move to new plots is imminent.

The trustees have been very heartened by offers of fundraising and practical support for the Charity from the local community. We want to encourage this support and shall be inviting you to discuss how this may be achieved in practice after the outline planning application has been submitted. “