You’ve no doubt heard of Woking and Sam Beare Hospice, which has been serving area residents for decades, providing critical end of life care for terminal patients. Maybe you know someone who’s been helped there or supported it yourself by donating, taking part in a fun-run or midnight walk, or buying books at its charity bookshop on Weybridge High Street. But how much do you know about the hospice itself? 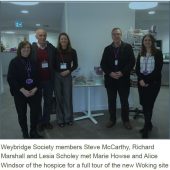 Feeling a bit ‘us neither’ – and sheepish for not yet having been to the hospice’s new premises – a team from the Society went to meet with staff there in late November. As the Weybridge Society has supported the hospice’s work for many years, the visit was well timed – just as the hospice was celebrating the tenth anniversary of its bookshop and offices in Weybridge and gearing up to the Dec. 5 grand opening of its new premises located at Goldsworth Park, Woking.

Founded in 1996 by Rhode Lofting, the original Woking Hospice opened its ten-bed care facility in Hill View Road, Woking. Meanwhile, a ten-bed Sam Beare palliative care ward was in operation at Weybridge Hospital for nearly four decades, becoming Sam Beare Hospice in 1999. Funded by the NHS from 1999 to 2005, Sam Beare Hospice at the Weybridge site became a registered charity in June 2006. High costs and onerous rents contributed to the decision to shut that site in 2016, though the decision to merge Woking Hospice and Sam Beare Hospice to a state-of-the-art facility in Goldsworth Park, Woking was already in the works, having been taken in 2014.

Located within the same complex that housed the Weybridge NHS doctors’ practices and Weybridge hospital on Church Street, Sam Beare Hospice luckily moved out in the winter 2016-2017 before the devastating fire last summer that destroyed the building. Some hospice administration and key community care services did and do remain in Weybridge, located temporarily at Clive House on the Queens Road, but the main in-house hospice care is now located at the new Woking facility.

The state-of-the-art facility, which can keep up to 20 overnight patients, is partly supported by the NHS but also relies heavily on the generosity of the local population.

‘For every pound funded – which we receive from the NHS – we need to find another four pounds from fundraising,’ said Alice Windsor, the hospice’s Community Fundraising Manager. ‘Many of the rooms and areas in the complex were only made possible by donations.’

The incredible facilities include a wellbeing centre/common room with individually adjustable sofa chairs, dining area and kitchen, which look out through a glass door wall onto a beautifully landscaped garden. Chelsea award-winning garden designer Charlotte Harris created the garden as a donation of her talents after her mother was cared for at the hospice. The garden also includes ‘The Retreat,’ a small zen-like building that serves as a multi-faith prayer room, donated by Sharaz Homes and affiliated Asian community.

In addition, the ground floor boasts a fully-kitted physiotherapy room, meant not just for one’s last days but the last years when a terminally ill patient needs care and exercise. The rooms allow physiotherapists to give quality in-house care, but the facilities are open to all who are referred by their doctors to the hospice scheme. Some critically ill or disabled patients, for example, might come in for a bath or a therapy such as massage, relieving their carers for just a few hours. Two therapy rooms provide the space needed for these all-volunteer therapist activities, while an incredible bath room houses a super high-tech medical appliance bath tub, complete with cranes for lifting people and including all manner of adjustable jets, which alone cost in the order of £20,000.

‘It’s about supporting not just patients but also their carers and extended families,’ said Windsor. ‘We rely heavily not only on funds raised but also on volunteers – we have about 200 paid staff, which covers the clinical and admin team, finance and human resources, but we also have about 800 volunteers – everyone from therapists to café staff.’

Indeed it’s a massive undertaking to provide the variety and depth of care as the hospice also operates a Day Centre four days a week, a set programme of hours and activities for patients both in-house and out-patient. The hospice also provides funeral care service assistance and bereavement counselling.

‘The vast majority want to pass away at home, so our hospice makes that possible,’ noted Marie Howse, of the hospice Marketing and Communications team.

Windsor and Howse agreed that counselling is a big part of the Sam Beare care package as about 70 percent of hospice care is outpatient: in care homes or in people’s own homes. Together with nurses teams from the Princess Alice Hospice and Marie Curie, the cancer charity, the option always remains to take care of a dying patient at home.

For those who do come to stay at the Woking hospice site, rooms have all the mod cons and high tech smart services, with balconies large enough to accommodate a bed, and the room itself big enough for a caring friend or family member to stay overnight. Down the corridor from upstairs rooms, a small common room with a mini-kitchen allows visitors to relax, watch TV and make a cup of tea. Just across the street from the hospice is a shopping mall with a Waitrose food store, a petrol station and other shops. The fact that pets can visit the hospice too makes the experience of a stay at the hospice as pleasant as possible.

The average patient stay in-house is about two weeks, noted Howse. ‘Care here is free, but it’s on a case-by-case basis that the doctors and families involved decide. The pathway here is palliative care. Hospitals can make people better, but hospices can only make people comfortable.’

In addition to the outpatient services for Weybridge that are run from Clive House, the Woking and Sam Beare hospice services other boroughs in north Surrey, six in all: Woking, Runnymede, Elmbridge, Spelthorne, North Guildford and Surrey Heath. To access any of these types of care (in-house or out-patient or at-home) local patients must obtain their doctor’s referral. Would you like to support the Woking and Sam Beare hospice with a donation or get in touch? Visit www.wsbhospices.co.uk