The Triangle Residents Group (TRG), which represents residents living inside the triangle formed 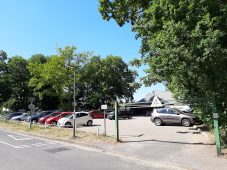 by Queens Road, Hanger Hill, and the railway line, has informed the Weybridge Society of the following note from Councillor Peter Harman, dated 12th March 2020, which may be of general public interest:

‘As a Council we are looking at reviewing the use of this car park. It is clear from my observations it is clearly not used for the intended purpose. In the past 3 weeks there have been 6 untaxed vehicles and numerous vehicles parked for the whole day.

This is clearly an unsatisfactory situation and needs to be addressed. We accept that parking is at a premium in the surrounding roads but misuse of this facility is unfair to bona fide users. No decisions have been made which is why I would like to hear views from local residents and the users of the green and Cricket Club.

There are a couple of options open including a limited maximum stay and Pay and Display Mon to Fri daytime. We are open to any suggestions and look forward to your response.’

TRG is in the process of consulting residents who live in the area and will submit a response to Cllr Harman.

If you do not live in the Triangle area but use the Cricket Green and its car park, we suggest you convey your views on the options suggested by Elmbridge Borough Council and any other ideas you have regarding this carpark directly to Councillor Harman by email at PHarman@elmbridge.gov.uk

Your contribution helps us campaign to keep Weybridge a great place to live. We monitor local developments and send you directly information about them.

Sign up here for our email alerts and our quarterly newsletter delivered right to your door. Individual membership is only £8 a year!